Monte Do Gozo - Mount of Joy

Monte del Gozo or Mount Joy, a modest little hill (380m) at the end of the Camino Frances, provides a special moment at the end of the journey. It may bring happiness, joy, emotion or simply relief that the end is in sight. The cause of this a moment of great joy is the first glimpse of the great towers of the Cathedral - and the confirmation of just another 5 km to the Cathedral of Santiago de Compostela.

This is the place where the pilgrims arrive from the Camino del Norte, Camino Frances and the Primitivo converge. The Codex Calixtinus (XII century) cites it in Latin as Mons Gaudii, and French pilgrims referred to it as Montjoie. Other famous Christian sanctuaries, such as Jerusalem, Rome and Oviedo, also have their Mons Gaudii from where the pilgrims see their sacred destination for the first time. On the Via de la Plata it is Pico Sacro, on the southern outreaches of Santiago near Vedra. 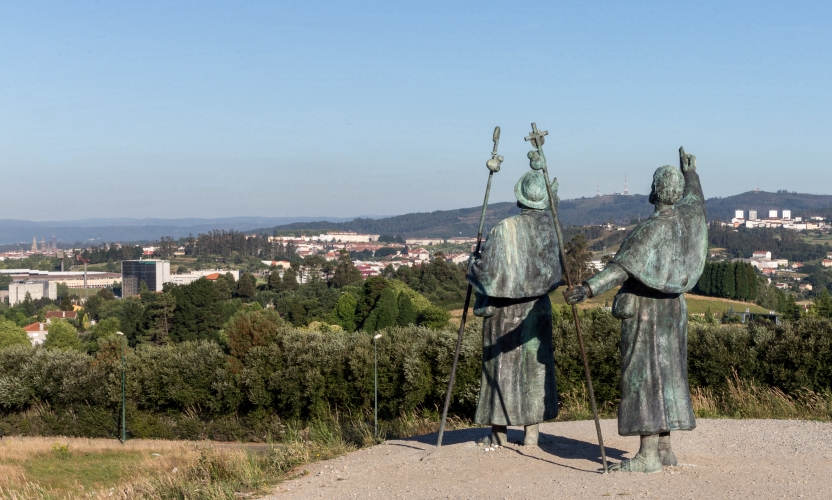 Historically Monte do Gozo, perhaps had a great stone column topped by a Cross, or a great pile of stones and accompanying Cross echoing the Cruz de Ferro in El Bierzo.

Pope John Paul II came here to celebrate the World Meeting with Youth of 1989, one of the events that helped to promote the pilgrimage to Santiago throughout the modern world. In the Holy Year of 1993, the Cathedral viewpoint was marked by two sculptures of Jabobean pilgrims, by the Galician sculptor Acuña. A monumental & controversial structure of ceramic, steel and stone was placed here in 1992-1993 by the Brazilian artist Yolanda d'Absburg.

The Codex Calixtinus records a miracle from 1080 when twenty French Knights set out on their pilgrimage under oath to protect each other. One fell ill and was abandoned in the Pyrenees by all his companions, except one faithful knight. The Apostle Santiago miraculously transported both the dead and surviving knights on horseback to Monte do Gozo to meet their fellows and convey the meaning of pilgrimage. 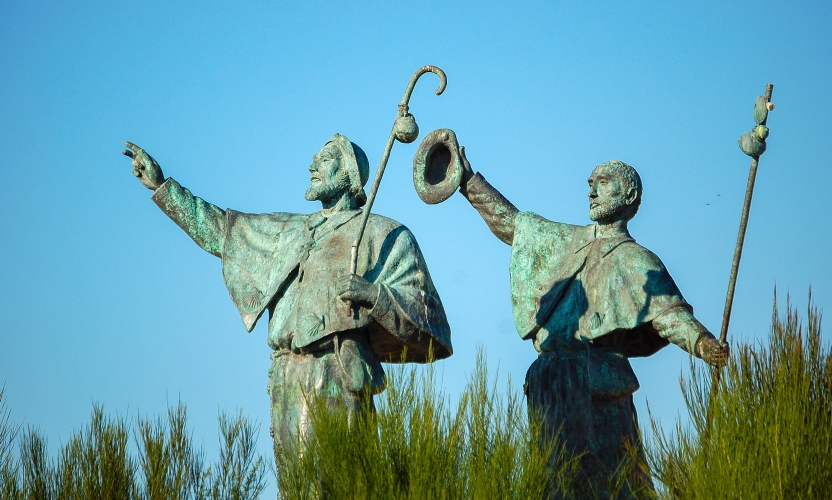 There are other historical records of the Mount of Joy. One of the most celebrated is that of the Italian pilgrim Domenico Laffi from the17th-century. Filled with emotion and joy " We arrived at the summit of the Hill of Joy, from where we could contemplate the city of Santiago in the distance. We fell to our knees and began to cart and sing the Te Deum. But we could not recite more than two or three verses because a large amount of tears shed by our eyes did not allow us to speak. The emotion that shook our hearts and the continuous sobs forced us to stop the song, until finally relieved by the crying, which little by little gave way, we again sang the begun Te Deum and thus, singing, we made the descent to the city, which is beautiful and large and always under construction; finished the village, we arrived at the door. "

Many pilgrims who decided to walk the last 5 km barefoot to the Cathedral. Many on horseback would dismount and walk the last stretch on foot. There were many such gestures of devotion and gratitude to express the joy of imminent arrival in Santiago. Groups travelling together would endeavour to be the first of their company to reach the summit and be recognised at the 'king' of their party. Such as Guillaume Manier in the 18th-century making it first up the hill - "When I saw them I threw my hat in the air letting my colleagues, who came behind, know that seen the bell tower [of the cathedral]. Everyone, when they arrived with me, recognized that I was the king."