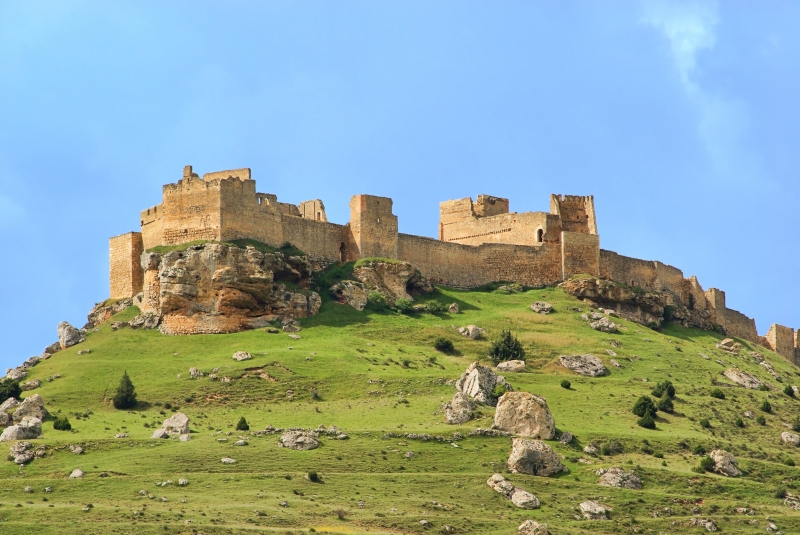 This historic trail crosses Spain from northwest to southeast following in the footsteps of this legendary medieval knight. This first stage starts at his hometown near Burgos, following his flight into exile with his loyal band of knights and soldiers.

Rodrigo Diaz de Vivar was an 11th-century Castillian noble and military leader in medieval Spain. He was born in Vivar, near the great Camino city of Burgos, where he lies entombed in fitting grandeur. Hero to Christians and Muslims alike, the Moors gave him the name El Cid - translated from the Arabic for Lord and the Christians call him El Campeador - Outstanding Warrior.

This is an epic trail, split into 7 themed sections which follow the Cid's adventures through 8 provinces of modern Spain. From Castille-Leon the trail crosses the provinces of Guadalajara, Zaragoza, Teruel, Castellon and Valencia.

We are introducing the first section, The Banishment or Destierro, following his flight into exile from his hometown, and stretching 286 km to the Moorish frontier town of Atienza, just 2 hours from Madrid. El Camino del Cid has its own GR number 160 and is already very well way-marked with the distinctive GR red and white stripe.

The El Cid version of the credential is known as the Salvoconducto or safe conduct document, a 21st-century echo of the document used in the Middle Ages to ensure the free and safe passage of travellers.

You collect the seals of the various stages as you progress, which will eventually entitle you to obtain the El Cid Diploma, if should you return to complete the entire route. The Salvoconducto is a wonderful memento and record of your walking tour in its own right, with some beautifully designed seals to collect in each region.

Why Choose the Camino El Cid

This route runs through medieval Castile across steppes and mountain landscapes; through beautiful natural landscapes such as Juniper forests. The historical and medieval area of the River Duero is also famous for its superb wines. Rural Romanesque architecture to admire - as well as the Gothic Burgos Cathedral, the Romanesque Cloister of Santo Domingo de Silos and the impressive the Islamic Gormaz Castle.

Known as the Destierro or The Banishment, this first part of Camino of El Cid follows the trail of the famed Knight's exile. The Cid was forced to leave his home in Vivar under Royal order to leave the Kingdom of Castile - wrongly accused of larceny by courtiers bent on his downfall.

First transporting his wife and daughters to safety in the Monastery of San Pedro de Cardena and he gathered a band of loyal knights and soldiers to journey south. In Zaragoza, he found mercenary work for the Muslim rulers and set his sights on Valencia.

The magnificent Cathedral of Burgos houses the magnificent tomb of El Cid. You will find yourself immersed in the stories and places of this local hero.

You will explore the valleys of the Arlanza and Duero rivers with native juniper, oak and pine forests, scrub and moorland. You'll encounter numerous watchtowers and castles, crowned by the colossal Califal fortress of Gormaz where El Cid was the warden.

You will be able to visit two of the great founding Castilian monasteries San Pedro de Cardena and Santo Domingo de Silos with Romanesque carvings in the cloister.

Much of the trail is dominated by wonderful landscapes and small towns with a distinctively medieval atmosphere. At the end of the route, you arrive into the impregnable Atienza, declared a site of Historic and Artistic interest.

Essential dishes include the famous morcilla de Burgos - black pudding, which is an ingredient in many traditional Burgos casseroles.

Roast suckling lamb is found all along this trail.

The Soria region is a mycological paradise with seasonal specialities of chanterelles, boletus, thistle mushrooms, amanitas, setas and truffle.

Soriana dishes include game stews of deer and wild boar.

If fish is your dish, you'll find local recipes using trout and cod.

In terms of regional wines, D.O. Arlanza is good but the top vintages are from Ribera del Duero.

Typical desserts you'll find are cheeses, often accompanied by nuts and honey and pastries made with Soria butter.

Hospitable, comfortable, small establishments with high levels of personal service are our brand of lodging.

Hand-picked and known to us, we usually choose comfortable, small, family-run establishments on the Camino.

Your accommodation will include a variety of guest houses, apartments and 1 -3-star hotels & hostals. All rooms have en-suite facilities.

If your budget allows, we can suggest some accommodation upgrades, as we often work with the top-end establishments on the Camino. Where rural lodgings require a short transfer off the Camino, we think you'll find them very charming and comfortable and worth the minor inconvenience.

Our high level of personal service and customer care offers the best in the local food, culture and history.

Fly into Madrid and transfer by train.

Return flights from Madrid with a transfer from Atienza.