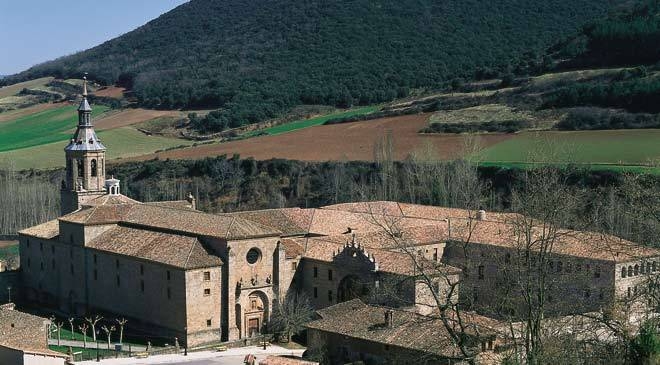 Yuso is the C16th monastery which also houses a 4* hotel

The twin monasteries of Yuso and Suso are located in San Millan de la Cogolla (La Rioja), less than ten kilometres from the town of Najera on the Camino Frances. They are known as the cradle of the Castilian language, as it was here that the first written evidence of this language was recorded. Best visited as a 2-day detour from Najera, you will enjoy a walk through vineyards to San Millan de la Cogolla. This tiny settlement is dominated and defined by this UNESCO world heritage twin monastic complex.

A trip into the Sierra de la Demanda to visit these two monasteries will add about 23km on foot there and back from Najera. But, if you prefer to properly enjoy a rest day with minimal walking take a local bus or taxi. There's also an opportunity for a vineyard tour with wine tasting.

The simple monastery of Suso, set on a hillside just above the village, was established in the C7th and incorporates the hermit caves of San Millan and Santa Oria. In the C10th it was repurposed as a church and then rebuilt in C11th in a mix of Mozarabic, Romanesque and Gothic styles. The cave still contains the C12th tomb of San Millan himself.

In the valley below, San Millan de Yuso, the later C16th Renaissance monastery impresses. The statue on the façade is often mistaken for Santiago in his Moor slayer incarnation. But this is actually San Millan, mounted on a horse with a sword. Plaques in the Salon de los Reyes display the first written examples of Castellano (Spanish) and Basque from the C10th.