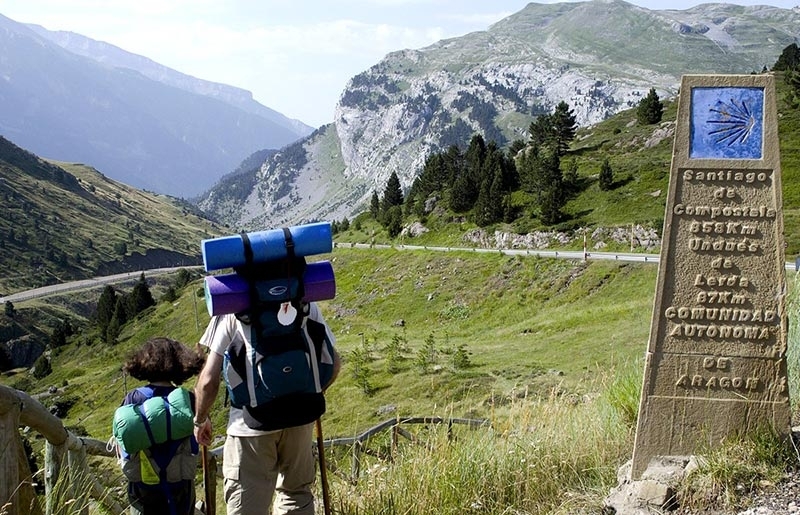 The Aragon Way runs westwards through the provinces of Huesca, Zaragoza to Navarra. The scenery is dominated by the mountains to the North and rolling hills to the South.

A sadly neglected Camino by many international walkers but enjoyed by many Spanish and French walkers. Remarkable for its spectacular and varied terrain and is mostly unspoiled by commercial tourism.

The wooded slopes of the Pyrenees give way to the steep limestone hills of the valley of the upper river Aragon, a popular area for skiers in winter. You progress to the lunar landscape of the Aragon valley west of Jaca. Lonely and remote, this region has a beauty all of its own.

At the other end, the Camino Aragonés joins with the Camino Frances in the village of Obanos; just before Puente la Reina and 20 km south of Pamplona.

Although the Aragon Way, is more remote and less frequented than the hugely popular Camino Frances, it does pass through some 20 towns and village offering limited services for walkers.

It also makes for an alternative first section for those wishing to complete the full Camino de Santiago. Rather than starting in the busy French town of St Jean Pied de Port, it is possible to begin near the Somport Pass at Urdos in France or Canfranc in Spain. 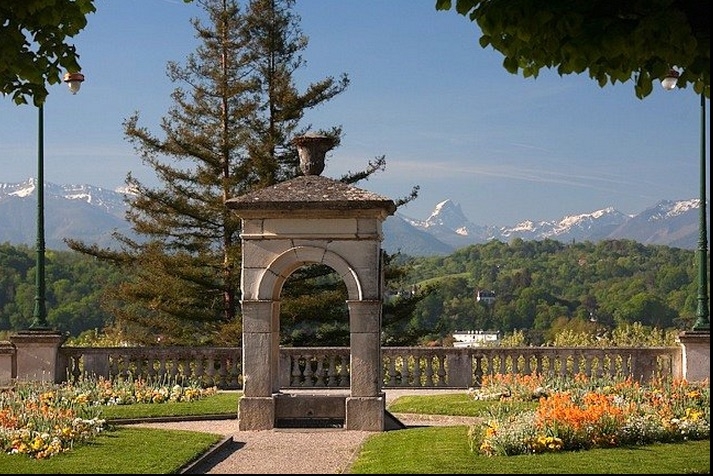 The Pyrenees seen from the Chateau in Pau

You can also begin this trip from Toulouse or Arles in France. The Arles Way joins with the Camino Aragon at the Somport Pass in the Pyrenees.

The Arlés Way or Via Tolosana begins in the eponymous Provencal city and makes its way broadly westwards, through Languedoc to Toulouse in the Midi-Pyrénées, then turns south along the Gave d'Apse and verdant river valley with panoramic views of the Pyrenees.

Arles, in the Provence region of southern France, is set on the banks of the River Rhone. This town, with Roman roots, is famed for inspiring many artists including Picasso and most famously Vincent Van Gogh. Between Arles and Montpellier crosses the Camargue, the drained marshland of the Rhone delta, famous for its wild, white horses. The countryside is dotted with important ancient pilgrim sites, vineyards and you pass through many beautiful villages. You arrive into the magnificent city of Toulouse along the Canal du Midi, then proceed west through the 3 Musketeers town of Auch, on through the Béarn to the ancient royal city of Pau. From Oloron Sainte Marie, the route swings south to follow the Aspe valley, eventually crossing the Pyrenees into Spanish Aragón by way of the Col du Somport. Once in Spain the route becomes known as the Camino Aragonés and follows the valley of the River Aragón south to Jaca. Then westwards, still following the river valley, through Aragón and Navarra to join the Camino Francés just before Puente la Reina. You can continue along the Camino Frances as far towards Logrono in La Rioja, or reverse Camino to Pamplona. Both of these cities have good transport links by road and rail. 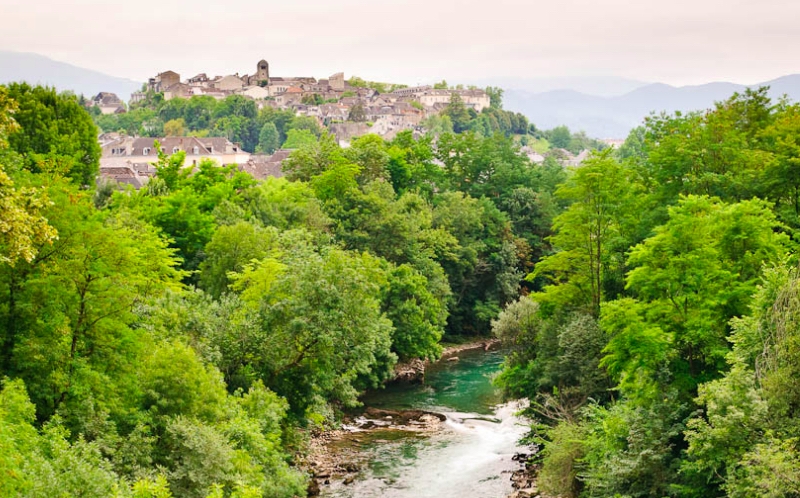 Recently, the path of the Camino Aragon has been somewhat disturbed by the construction of a new motorway which passes along the northern banks of the Yesa reservoir. This has caused some interference with the north variant of the Camino as the path is near to the motorway.

Our preference is to direct you along the south banks of the Yesa reservoir, through tiny abandoned villages and magical countryside. However, this does mean that services for walkers are sparse. On occasion, we may have to make the choice between transferring clients off route to a hotel or accepting one or two overnights in more simple accommodation. We will always advise you of availability and hopefully, be in a position to give you a choice.

For example, the hilltop village of Artieda only offers dormitory accommodation with shared facilities, but the Albergue does have a very nice restaurant (Mexican fusion) and fabulous views from its terrace to make up for it. We normally transfer our clients to Leyre for this night. 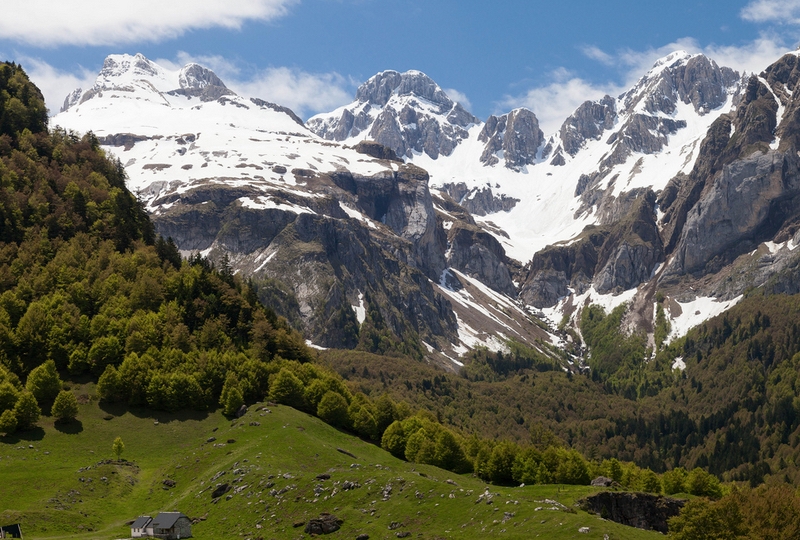 Beginning at the famous mountain pass of Somport, at an altitude of 1600 m / 5200 ft, you find yourself amongst the highest peaks of the Pyrénées where the views are wide and wonderful.

Below Canfranc, the valley is wooded and the path follows the tree-lined river banks to Jaca, today a popular winter resort. This town is the legacy of the first King of Aragon Ramiro I Sanchez, who founded Jaca as his capital in 1035. He is buried at the Monastery San Juan de la Pena. You can also make a detour to visit this monastic site of you have an extra couple of nights.

From Jaca, the Camino follows the valley of the Aragón River. There is a detour to the Monastery of San Juan de la Pena which is a famous national monument. This will add substantially to your days walk, being 11 km from Jaca. But you can spend an extra night here to discover more about the history of Aragon, visit the old monastery and enjoy the surrounding countryside. 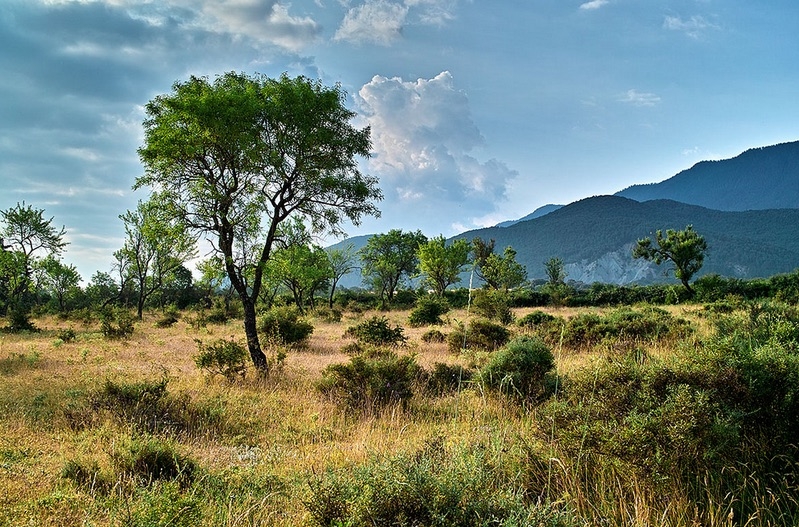 From Puente de la Reina de Jaca there are two routes, one heading either side of the Yesa reservoir and both joining up again in Sanguesa. The north bank route heads through Berdun and Tiermas to the Leyre Monastery but now shadows the new motorway. Construction here is ongoing. Currently, we prefer to take you to the south away from the new A-21 motorway that will link Jaca and Pamplona. The south bank route is a very quiet country path through Ruestra & Undues de Lerda and follows a Roman paved road for a little way. Both options come together once again from Sanguesa following farm and forest tracks.

The Camino Aragon moves into eastern Navarra leaving River Aragón behind at Sanguesa and continues through the uninhabited mountains of Izco and Aibar to go down to the valley Ibargoiti. As you head into west Aragon and Navarra beyond low hills and cultivated fields appear on the approaches to Puente Ia Reina. The final stretch to Puente de la Reina also offers two route options both of which unite just before the extraordinary Church of Eunate.

The 100 m / 160 km route is well-waymarked throughout. You will find the waymarking differs in Aragon and Navarra. Aragon has the yellow arrows and GR 653 markers with scallops and the red and white GR banding. In Navarra concrete bollards have shells and arrows on them, but yellow arrows continue to point the way. 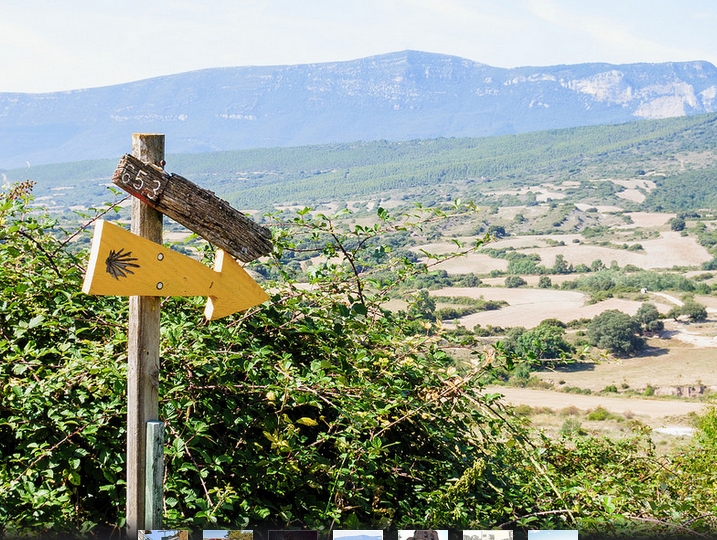 Close to the Camino de Santiago route this monastic complex consists of two sites. The original monastery is known as the Royal Monastery was established in the C10th. A combination of stonework and natural rock forms the walls under an overhanging rock at the base of the cliff from which comes the name Peña meaning rock. It has a magnificent Romanesque cloister and the Real Pantheon, of neoclassic style, erected in the 18th century.

The new monastery was constructed above the cliffs in the C17th. The monastery was abandoned in 1835 with only the church and its grand Baroque facade surviving. There has been archaeological work carried out here and in 2007 a museum was opened, with a glass floor which allowis visitors you to observe the archaeological site.

There is also a very nice hospederia hotel here for those who wish to stay overnight and visit the entire site.

One legend attached to San Juan de la Peña realtes to the Holy Grail, brought to Aragon by Spanish soldier from Rome during the C3rd and kept safe in Jan Juan de la Peña during Moorish invasion. Later the King of Valencia acceded to the Aragon throne and took the Grail back to Valencia Cathedral where can be seen today. Historians confirm the vessel as a genuine Roman agate cup. 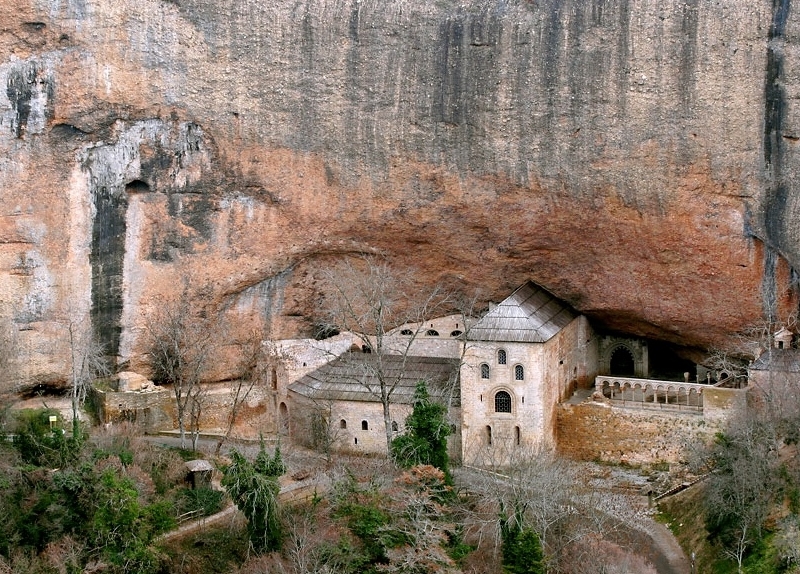 Historically this Camino was mainly frequented by Italian pilgrims using the Via Francigena and Via Tolosana from Arles and Toulouse.

Remains of this medieval legacy can be seen all along the Aragones Way; in the ruins of pilgrim hospitals, Romanesque churches, arched pilgrim bridges over the Rio Aragon, roman paved roads, hermitages and castles and fortified towns.

History recounts the legacy of resistance and domination by Romans, Visigoths, Iberians and Moors until the foundation of the Kingdom of Aragon in the 11th Century by King Sancho III. "Sancho the Great" establish Jaca as his Capital and raised a great Cathedral.

The superb monastic complex of San Juan de la Peña, began as a hermitage. The Old Monastery shelters under an enormous rocky overhang which dates back to the C8th has a Mozarabic church and Royal Pantheon. The new Monastery dates from the mid C17th and sits in a vast meadow. It houses an interpretation centre.

Beyond the Col du Somport, the southern slopes and the valley of the river Aragón are more stark, bare and rocky. It's a fairly easy descent leading down towards Jaca where the Camino then follows the Rio Aragón westwards.

After Jaca comes extensive arable farmland, anticipating the meseta ahead; you pass dramatic rocky moonscapes and the vast reservoir of the Embalse de Yesa. The villages here are partly or entirely abandoned and mineral landscapes in the valleys, created by erosion, alternate with forests on low mountains.

After the Sierra de Izco, the trail goes down to the superb Sangüesa. During the last stage, you will experience never-ending ups and downs until reaching Tiebas. Arriving at the magnificent Santa Maria de Eunate is a great moment, that signals the end of this part of the Camino journey, as you're just a few km to Puente-la-Reina. From here you have the honour of joining the main pilgrim flow towards Santiago de Compostela.

The Way is mainly a single route but watch out in Aragón and Navarra as there are also variants mainly to famous monasteries.

There are two forms of waymarking, the iconic yellow arrows and the GR red and white stripes. Known as GR 65.3 the trail is also part of the Spanish network of Senderos de Gran Recorrido.

We have selected small and comfortable family-run establishments on the route. All rooms have private en-suite facilities. Lodgings are offered on a Bed and Breakfast basis where there is a good choice of available restaurants, but half board where the lodgings are more remote. We hope you relish the opportunity to try local Aragonese dishes and soak up the local atmosphere.

We quote all our journeys with bag transfers as standard. We heartily recommend that you book your main piece of luggage to be transferred between accommodations. It helps your enjoyment of the walk and keeps unnecessary stress off your back and joints.

This remote route is not operated by the main Camino baggage companies due to low traffic. Therefore we work with local drivers and hotels to transport your baggage. This does make for a more expensive service but we still consider it value for money and an essential service.

This daily service is organised so that all you have to worry about is carrying a day sack with your essential items.

If you do wish to carry your own bag that is fine with us.

Please ask for details according to your location. Local access from France and Spain 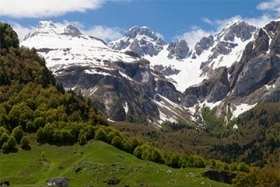 Aspe Peak in the Pyreenes 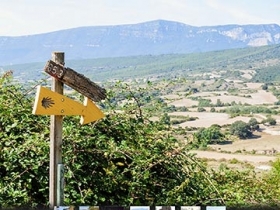 Following the GR through Aragon 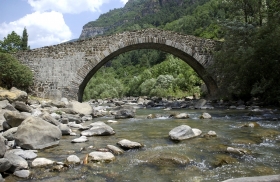 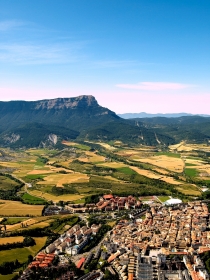 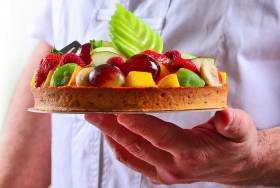